Syria before the war was rated one of the top tourist destinations for religious, culture and heritage holidays, and a paradise for archeologist thanks oldest inhabited cities Damascus and Aleppo, and its ancient sites, which became UNESCO's World Heritage.

Syria's tourism industry which was improve every year, started to decline following the unrest in January 2011, which turned into a real political crisis in March 2011 until present. It should be noted that technology development has facilitated the flow of information. The image of Syria switched from a beautiful religious, culture and heritage holiday destination, and a paradise for archaeologist to a bloody battlefield, consequently the country has experienced the worst war ever took place on earth.

Syria, where history has a voice and where soil has the scent of civilizations. In Syria the memories of perseverance and human  innovations meet: Mary, Ebla,Ugarit Kadesh, Amrit, Apamea, Dura Oorobos, Palmyra, Bosra, Shahba, Rusafa ... In addition to all brilliant  names : Damascus, Aleppo, Hama.

The most marvelous greatest civilizations were born and interacted on the Syrian land, and human achievements that benefit humanity until today. No matter the war but still a journey around Syria is not just a trip of kilometres but also of millennia and along the tracks of civilizations. Visitors to the capital can largely confine themselves to the magical winding streets of the old city, which has the Great Umayyad Mosque at its heart and a thriving Christian Quarter, similar to the northern city of Aleppo.

Around 10 per cent of the country's population is Christian and such tolerance has always been part of Syria's culture. The past echoes with a who's who of conquerors and conquered with evocative names such as Hittites, Canaanites, Phoenicians, Assyrians, Romans and Byzantines to name but a few before the arrival of the Islam in the 7thC AD.

The once-thriving Mediterranean port at Ugarit, now no longer even on the coast, is believed to be the birthplace of the world's first alphabet around 1500BC while in the east near the border with Iraq the ancient city state of Mari, was home to a magnificent Mesopotamian royal palace until it was sacked by the Babylonians in 1758BC.

The historical time-line continues in Palmyra, which is in the heart of Syria's desert solitude. The desert city of Palmyra is in the heart of Syria. The caravan city remains a wonderful mix of ruins and reconstructions, of arches and colonnades, tombs and temples with the vast Temple of Bel a mighty symbol of the city's great wealth. Under the formidable Queen Zenobia, Palmyra became so powerful the Romans felt the need to put the feisty regina in her place and legions razed the city walls and carried her off to Italy in chains of gold in 217AD. ISIS not only beheaded people of Syria but also destroyed the ruins of Palmyra and many other sites there.

Back to the history and the ancient sites of Syria. The magnificent Krak des Chevaliers is the best preserved Crusader castle in the Middle East, rebuilt and expanded in 1144 by the Knights Hospitallers. The ruins of Saladin's castle Further north is Saladin's Castle which, while nowhere near as well-preserved, was unexpectedly impressive situated among pine forests with dramatic ravines on three sides. It was previously known as the fortress at Saone after Robert de Saone who built the castle in the early 12thC. It was stormed by Saladin in 1188, the noble Islamic hero whose tomb can be visited in the Umayyad Mosque complex in Damascus, and yet only named in his honour in 1957.

Most importantly, the only thing that really matters is for peace to return to all Syria soon. It is their country and their future and no one is better equipped to care for it than Syrians themselves.

This is a dirty war, a dirty "game" against Syria. 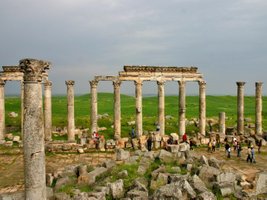 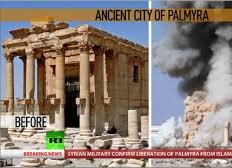 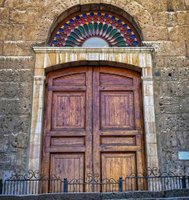